To anyone who believes that the Friend Zone is an actual thing and that there just cannot exist a platonic relationship between a male and a female: boy do I have some news for you!

The Friend Zone is not real. Yep. It isn’t a thing. It is just an extremely stupid notion that some people have in their heads. This notion makes them somehow believe that they are entitled to sexual gratification from a person just because they are being “nice” to the said person.

According to these people, there exist only very few things worse than a Friend Zone. I wanted to see how much pain these delusional people feel like they are in, so, I googled. According to this very enlightened person on the Urban Dictionary, the Friend Zone is “a metaphorical hell for men.” And that, girls, will reject a nice guy, and date douche-bags, all the while complaining to the nice guy; saying things like “Why can’t all guys be like you?”

Let us, for a second, forget the utter stupidity of those statements. Now, why does this grown-up man think that a woman has to sleep with him just because he was nice to her (and she, too, was being nice to him – which is literally the common human decency)? And why does he think that he can control the said woman’s dating choices – or literally any life-choices, for that matter? 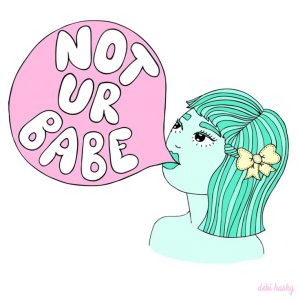 No, really, what is so difficult to comprehend about a woman’s ‘NO’? Do you perhaps have a setting in your brain that autocorrects a woman’s ‘no’ to ‘maybe if you try harder, I’ll finally say yes!’ (Insert the winking emoji). And don’t even tell me that had this woman said ‘YES’ blatantly instead, you wouldn’t have proceeded to call her a ‘slut’!

Countless Bollywood movies have glorified the concept of the Friend Zone with their typical Roadside Romeo plots. These movies, unfortunately, glorify the male protagonist who constantly keeps on pestering the girl, confessing his feelings towards her (most of the times, out of the blue). And now, somehow, this girl is the one leading him on and is, inevitably, a bad person. It’s funny, right?

Seriously, why is the male ego so fragile? Why can’t men face a simple rejection? Why do some men feel the need to throw acid in someone’s face just because this someone doesn’t wish to enter into a relationship with them?

If I had to sum-up the concept of the Friend Zone in a few words, I’d say that the term itself is very misogynistic. Because why else would you place the blame of a rejection on a woman just because things didn’t go ‘your way’?

I do really hope that people who think they are Friend Zoned find out that it might be a “metaphorical hell”, but it is one which is entirely created by men for men. And I hope that these people also realise that women don’t owe them shit!