When I menstruated for the first time, my grandmother made sweets and told me that it was a time to celebrate because I had become a woman. I didn’t know what it meant back then. I didn’t know that it’s considered my duty as a woman to reproduce and that’s why the start of menstruation is celebrated across different cultures. Isn’t it ironic though? The start of menstruation is celebrated but at the same time, we are taught to keep mum about it for the rest of our lives.

Why is it so difficult to accept that it is a natural process in the female body just like respiration and digestion? Oh wait, is it patriarchy telling women to be ashamed of their bodies? No wonder it is!

It’s 2018 and chemists still cover sanitary napkins in a brown paper bag or newspaper. Women are made to pretend that men don’t know about it and they are not comfortable discussing it, so we have to carry our business in silence. I recently read about an incident where a male employee complained about a female employee for using a hot water bag over her stomach to soothe her menstrual cramps because he thought it was inappropriate and also because he was uncomfortable.

Some time ago, there was a debate in the media over menstrual leaves. While I agree with granting working women a menstrual leave every month because I personally suffer from unbearable stomachache, I can’t totally disagree with ones opposing it. According to them, if women are to be given a paid menstrual leave every month, employers will be discouraged from hiring women in the first place. If we think about how the man-woman power dynamics have evolved, one cannot deny that menstrual taboo has been an important reason for excluding women from positions of authority.

The taboo and shame around menstruation affect women physically and mentally. The physical pain and discomfort are inevitable, however, the anxiety to check the status of your napkin resulting in multiple visits to the loo is due to the fact that we don’t want our clothes to be stained (because then we won’t be able to hide that we’re menstruating). We have been wired in such way that it is the last thing we want. We might choose to sleep in an uncomfortable position all night long in order to save the bedspread from blood stains.

I recall an incident from college when I was in my class and my friend told me not to stand up because I had stained my kurta. I remained seated for the rest of the lecture and waited for everyone to leave before I ran towards the washroom. I am sure we all have had similar experiences at some point in our lives, at school/college/work.

The stigma around period(s) can keep girls out of school and women out of the workforce. In rural areas, girls drop out of school when they start menstruating due to lack of toilets for girls. Women without access to sanitary products use cloth which is not hygienic unless it is changed at regular intervals and washed and dried in the sun. Also, they resist the use of sanitary napkins because they fear it can be used to do black magic on them. A lot of women suffer from infections because of lack of menstrual hygiene.

But it is not all bad. As Bob Dylan crooned, the times they are a-changin’.

I guess most of you have heard about Arunachalam Muruganantham, a social entrepreneur from Tamil Nadu. Upcoming Bollywood flick Pad Man is based on his inspiring life. He invented a low-cost sanitary pad making machine and later trained rural women to operate it creating employment for them. Before he became famous, he was mocked for his interest in sanitary pads by his wife and sisters. Women were not ready to test the cotton pads created by him. However, he kept experimenting and came up with a product that was accepted by women.

A lot is being done by non-profit organizations to improve menstrual health and hygiene of women. Period or Menstrual cups are introduced in the market, they seem to be a cost-effective alternative for sanitary pads at the same time being reusable and eco-friendly.

It’s time to embrace our womanhood and be more open about menstruation. It’s time to stop being told what to feel and how to feel about our bodies. These are the bodies capable of creating life. Half of the 7 billion people
on this planet menstruate and it’s nothing to be ashamed of! 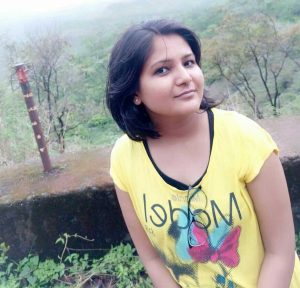 When not wondering about life and its meaning, Richa can be found volunteering at a local NGO or reading books at her favourite coffee shop.

When not wondering about life and its meaning, Richa can be found volunteering at a local NGO or reading books at her favourite coffee shop. View all posts by Richa Khobragade