This blog may sound a tad bit angry because I am angry. I am honestly tired of reading books now with literally very little or no diversity. Growing up as a kid obsessed with reading books, it wasn’t until later that I realized that almost every book I read had white protagonists. It was nothing short of a struggle for me to realize this fact but when these books were made into movies is when I realized that something was seriously wrong. It perhaps made me even sadder when the few POC characters were constantly overshadowed by the white characters.

It is time for parents to teach young people early on that in diversity there is beauty and there is strength. – Maya Angelou

I love Harry Potter. I have and always will be a fan of the Harry Potter series. But that doesn’t mean that the lack of diversity in those books doesn’t bother me (because believe me, it does!). Those series have always been set in a heterosexual, white world. Which has always made me dislike Rowling. And perhaps, my hatred for Rowling became even more pronounced when she continued to shove her straight, white characters onto us in The Cursed Child (not to mention the excruciatingly terrible plot). What’s worse is that she claims to support diversity but has never done so canonically in her books. And remember that one time when she misrepresented the traditions of Native Americans which roused quite the outrage from the Native American community.

Not less than three days ago David Yates (the director of 4 Harry Potter movies and of the five-film Fantastic Beasts series) announced that the Fantastic Beasts 2 will avoid Dumbledore being gay. When questioned why, his reply (which was utterly weak) was, “I think all the fans are aware of that.”  When fans tried to question Rowling, she only responded by a rather manipulative tweet and a gif when she could have handled this matter more graciously but, eh! 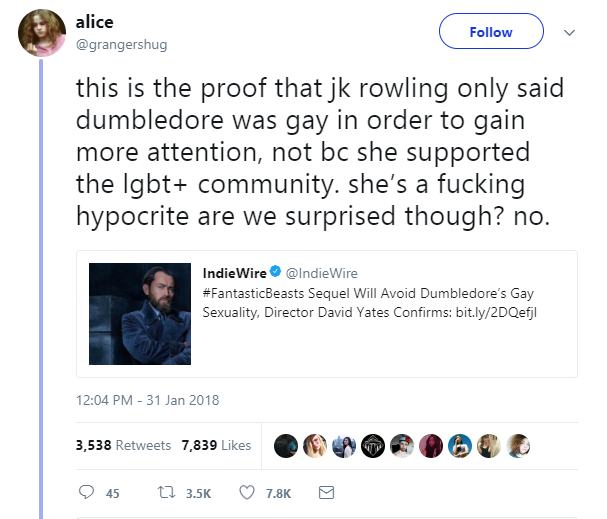 What I mean to say is that it’s sad that one of the biggest franchises in the world – one that has had a great impact on a million lives – is seemingly not diverse at all.

Now consider Rick Riordan. Riordan has constantly been supporting and promoting diversity in his books. Although the very first series by Riordan wasn’t remarkably diverse, he made it a point to improve on the representation in his books. The Kane Chronicles followed around Egypt mythology, naturally providing for a fair amount of dark-skinned characters. Riordan brought forward a lot of characters with varying backgrounds and ethnicities in The Heroes of Olympus – with one of the long-standing characters being gay. Riordan’s further works The Trials of Apollo and Magnus Chase and the Gods of Asgard continue to have mental health representation and multiple diverse characters – main POC characters, main LGBTQ+ characters, main Muslim female character, main non-binary character – all the while them having great personalities! Doesn’t seem that hard, does it?

When Rick Riordan first revealed Nico, a son of Hades in his best-selling Heroes of Olympus series, as gay people asked him “why?” and he said, “Because I wanted kids to see themselves in his books and that all kids need to be able to see themselves in literature and find reassurance that they’re fine just the way they are.”

Although, I’m glad that the situation is bettering itself. In 2017 itself there have been a great number of diverse book releases. Also, I recently found out about We Need Diverse Books (and I’m glad I did). WNDB is a non-profit organization whose Mission Statement is “putting more books featuring diverse characters into the hands of all children.” So essentially, their movement aims at creating more diverse books for children and for these works to actually be available to young people.

When children cannot find themselves reflected in the books they read, or when the images they see are distorted, negative, or laughable, they learn a powerful lesson about how they are devalued in the society of which they are a part. – Rudine Sims Bishop

We need diverse books because they’re especially essential in today’s world where we are constantly bombarded with news and articles with people blaming stuff on a particular community.

We need diverse books because we need children to read them and realise that there exist people different from us and that it is extremely important to know about them.

We need diverse books because it is not always a straight white, able-bodied male character that has to be the hero. The hero can be anyone. It can also be the granny staying next door to you, whom you have known for years, and is secretly the protector of the world who goes by the name “Granny Great.”

So, what I really want to lay emphasis on is that unless you’re extremely racist and LGBTQ+ phobic, then there’s absolutely no reason why you shouldn’t be writing diverse books.