Unless you’ve been living under a rock, are happy in your own bubble or are a misogynist who doesn’t consider women as people, you’d know what I am talking about. I am very enraged at how women all around the world are being treated right now. And what’s more exasperating is the nerve the accused men have in such situations.

Let’s begin with what really pissed me off to begin writing this article and of something which led to the Me Too activism being finally considered in India.

Bollywood actress and model, Tanushree Dutta, accused a very popular, veteran Bollywood actor, Nana Patekar, of molestation and inappropriate conduct while on the set of a movie back in 2008. Tanushree had spoken about the incident the same year but of course, like all other cases which involve a powerful, older man, the case was dismissed. When recently asked in an interview about if she had reported it earlier, she just said, “Yes. I had tried to get justice for myself when the incident happened from every possible organisation. Even the police and the judiciary let me down. When the perpetrator filed a counter-FIR, I was advised to just keep quiet about it.”

In this country, you need a lot of money and patience to fight a legal battle. The criminals have the resources.

While Tanushree was backed by many young Bollywood actors and actresses, the old, saggy, male actors, when asked for their views, remain to suspiciously remain silent about the whole situation. I wonder if the deep-rooted misogyny is into play?

Only days later, Sheena, wrote an article on Firstpost, talking of the hundreds of stories of sexual assault shared by women on Twitter. To quote Sheena, “Some are terrifying examples of violent sexual assault, some are ‘more palatable’ — workplace propositions, solicitations, sending or demanding nudes. Most live in the middle of the sexual harassment spectrum.” These multiple threads on Twitter and the terrifying stories exposed a lot of harassers we didn’t know we had amongst us. What’s saddening, though, is the fact that men not directly accused by this keep turning a blind eye to the situation because their “bros” are exposed.

Which reminds of how Juventus, an Italian football club, despite the rape allegations and accusation of misconduct by two different women against footballer Cristiano Ronaldo, has continued to back the footballer. His fans continue to support him. And it doesn’t stop at that, he also gets short-listed for the Ballon d’Or – this, everything, post the allegations and accusations. It really makes you wonder if men really even give a fuck about women at all. 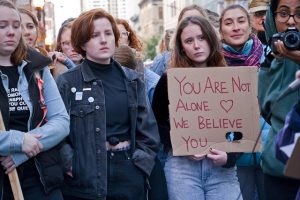 In a world where the power structures are built such that the survivors rarely get justice, a structure which allows the accused to walk away with zero accountability is, in fact, a structure that needs to be dismantled. We need to believe survivors. If you are a man reading this, take the fucking responsibility. If you’re not actively assaulting the women, you might be doing it passively. Please, call out men and women on their misogyny. And believe the women! That’s it. There’s no other way around it. Like Lady Gaga explains in this video the scientific side of how trauma affects a survivor and why it is absolutely necessary and vital to listen to survivors and believe them.

And I know for every Me Too there will always be hundreds of Not All Men. What we need to focus on instead is the fact that how the majority of the population belonging to the same gender (yes, I know, gender is a social construct) is inflicting pain and trauma and assaulting the other part of the population and no one is seemingly doing anything about it.

We need to give power to the voices of women – actually listen to them. We need to speak up ourselves and hopefully, other women will follow. Call out all the dirty, lying, filthy rape apologists – men and women both. Hold them accountable for the trouble they caused you. I know it may not always be easy but I have come to realise that fighting for things persistently is what’s going to make everything better for us.